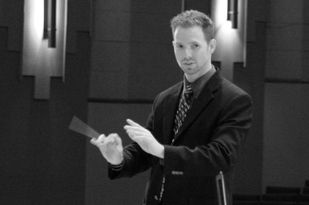 Casey Buck is an ardent performer and music educator. He began playing cello in the third grade, and through his experiences in the public school orchestra and youth orchestra programs, as well as the inspiration of many of his teachers, he decided to pursue music in college. Mr. Buck earned Bachelor of Music Education and Master of Music in Performance degrees from Loyola University New Orleans, where he studied cello with Allen Nisbet. Since 2006, Mr. Buck’s principal performance engagement has been as a member of the Arkansas Symphony Orchestra cello section.

As a music educator, Mr. Buck’s commitments are broad and diverse. The greatest share of his activity is through his work with Conway Public Schools, which began in 2006. Mr. Buck is the orchestra department head, directs the Conway High School Orchestra, and teaches Advanced Placement Music Theory at Conway High. He also assists with the orchestras at all four of Conway’s middle schools and the junior high campus. This affords him the privilege of working with students from their beginner year in sixth grade all the way through graduation. His students consistently receive the highest ratings at adjudicated performance assessments. In 2013 he completed the rigorous candidacy process to attain National Board Certification in Music. Since 2016 he served as a Reader, Table Leader, and Question Leader for the College Board’s annual AP Reading, helping to score the free response questions on the AP Music Theory exam. In addition, Mr. Buck has produced instructional videos for the College Board’s AP Daily program, available to students across the country and around the world.

In addition to his work in Conway, Mr. Buck directed the Preparatory Orchestra (one of the Arkansas Symphony Orchestra Youth Ensembles, serving first- and second-year string players across central Arkansas) from 2008-2020. He has also directed the Arkansas Symphony Orchestra’s Summer Strings program (formerly the UALR Summer Strings Camp) since 2011, and has been a clinician for the UCA Summer String camp since its inception in 2009. Mr. Buck’s teaching experience also extends to the university level, where he was a Visiting Lecturer of Music at Arkansas Tech University from 2006-2012, teaching String Methods and Applied Strings.

Actively involved with the Arkansas School Band and Orchestra Association, Mr. Buck has held board positions as State Orchestra Chair and Region Chair, and continues to serve as senior high orchestra manager and audition host for the South Region Orchestra. A 2020 GRAMMY Foundation Music Educator Award quarter-finalist, he has helped train current and future music educators by presenting workshops across the state on the Arkansas Fine Arts frameworks in partnership with the Arkansas Department of Education, as well as music theory pedagogy and ensemble best practices. Mr. Buck is passionate about public school music education, and honored to be a small part of the long legacy of teachers affecting the lives of students from one generation to the next. He lives in Conway with his wife, Kristina Rose Buck (a classically-trained mezzo-soprano and fellow music educator), and their two amazing daughters, Abigail Rose and Adia Shalom.